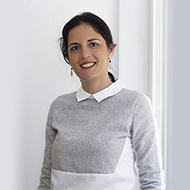 Marta de Ramón Ferrando is an expert in corporate law and provides advice to national and international companies, corporations and individuals.

After the Master’s Degree in Legal Business Practice by the Instituto de Empresa (Madrid) in 2002, she started her professional career in the Tax Department of Landwell in Madrid office.

Her practice in Landwell Abogados was focused in Tax Law (advice to companies and campaign of personal income tax corresponding to fiscal year 2002).

In September 2003 she joined the prestigious local firm of Uría Menéndez in Valencia office being Senior Associate until October 2011.

She also actively participated in the Litigation Department of Uría Menéndez, in civil and insolvency proceedings and arbitrations. She was part of the litigation department during two years.

Likewise, she has rendered regular professional advice to regulated entities (such as venture capital entities, insurance entities or private banking) and she actively took part in numerous multijurisdictional transactions, leading teams, including, among others, some of the most relevant transactions carried out in Valencia within the last years.

She has been lecturer in numerous seminars regarding commercial law.

She regularly publishes legal articles in press and in specialized magazines.